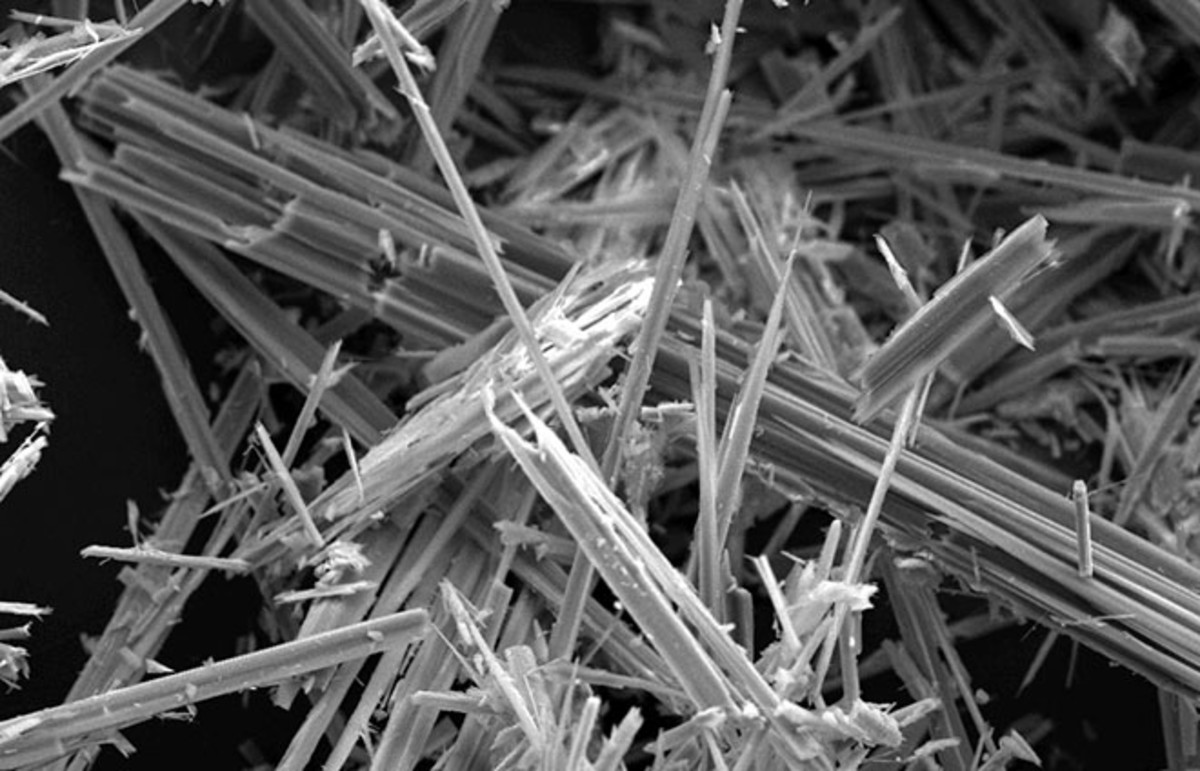 Unpicking the politics of a potentially deadly material

Asbestos is a group of naturally occurring fibrous minerals. These are useful because of their excellent tensile strength, poor heat conduction and resistance to chemical attack. Asbestos materials have been used for insulation in buildings and in various products such as roofing materials, water supply lines and clutches, brake linings, gaskets and pads for automobiles. Today, chrysotile – the only commercial asbestos still in use – is mostly used in fibre cement boards.

The top producer is Russia, which mined around one million metric tonnes in 2015. The major mines are located in Asbest, around 900 miles northeast of Moscow. China mined over 400,000 tonnes, with Brazil coming in third and Kazakhstan fourth. In terms of importers, India, China and Indonesia each imported over 300,000, 200,000 and 150,000 metric tonnes, respectively, in 2015.

That depends on where you live. Asbestos is banned in more than 55 countries around the world, including Japan, Australia and all countries in the European Union. Iceland was the first to ban asbestos imports due to health concerns in 1983, followed soon after by Sweden. Germany banned asbestos in 1992 and UK did so in 1999. However, it continues to be used around the world, especially in Asia and Russia, and in small amounts in the US.

Didn’t the US ban the use of asbestos?

Yes. The Environmental Protection Agency (EPA) first banned certain uses of asbestos in 1973 and banned most products in 1989; however, this was overturned by the Fifth Circuit Court of Appeals in 1991. To date, billions of dollars have been paid out due to asbestos litigation, which has severely restricted the use of asbestos in the US. Today, asbestos fibres in the US are mostly used in the diaphragm of chlor-alkali plants for the electrolysis of NaCl.

All of this could change. Last year, the EPA announced it would evaluate ten chemicals for risk to human health and the environment under the Toxic Substances Control Act (TSCA) reform. The EPA says asbestos exposure is associated with lung cancer, mesothelioma and asbestosis.

How much asbestos is used worldwide?

While it is no longer used in much of the Western world, countries such as India and China still include it in various products, using hundreds of thousands of metric tonnes each year. Inevitably, sometimes asbestos-containing products are shipped to Western countries.

And just because it’s banned doesn’t immediately remove all the asbestos already used. Millions of tonnes of asbestos still remain in buildings due to its use in the 20th century: as exposure to asbestos occurs mainly from breathing in fibres from contaminated air, disturbing these deposits can pose a health risk.

What are the known health effects of asbestos?

Asbestos causes cancers of the lung, ovaries and larynx and is suspected to cause others, including gastrointestinal cancer. Once inhaled, asbestos fibres may stay in the body and cause asbestosis, a progressive inflammatory disease that scars the lungs. Medical experts say there is no evidence for a threshold of exposure for cancer: any amount of airborne asbestos fibre poses a risk. Smoking is known to increases the risks of lung cancer with asbestos exposure. In 2007, the World Health Assembly called for global campaigns to eliminate asbestos-related diseases; the World Health Organisation recommends a banand says chrysotile causes cancer.

So asbestos is linked with deaths: how many?

The World Health Organisation estimates that around 125 million people are exposed to asbestos in the workplace and that at least 107,000 people die each year globally from occupational exposure to airborne fibres. About half of the deaths from occupational cancer are estimated to be caused by asbestos. Moreover, a paper in Lancet in December 2016 put deaths linked to ‘occupational exposure to asbestos’ at 180,225 in 2013. The burden of asbestos-related diseases is still rising, even in countries that banned the use of asbestos in the early 1990s.

What does the asbestos industry say?

That chrysotile (white) asbestos is chemically different from amphibole asbestos and that the body’s immune cells can break it down in the lung. The International Chrysotile Association argues that modern asbestos products are vastly different from older materials, and says chrysotile is safe when used correctly.

Is asbestos likely to be banned soon?

Signatories to the Rotterdam Convention – a treaty that governs the use of hazardous chemicals – met in May to discuss whether the chrysotile form of asbestos should be added to the hazardous substance list. The other five types of asbestos are already listed. The treaty requires countries that export listed substances to ensure that the receiving countries are fully informed of their health risks and that they consent to the trade.

The convention’s expert scientific body – the Chemical Review Committee – first recommended it be listed as a hazardous substance in 2006. However, producer countries and some countries that still use chrysotile asbestos argue that this form of asbestos is safe if used correctly. The World Health Organisation, various public health bodies and the public health community disagree. The Rotterdam Convention works by consensus among the 157 signatory countries; one objection can derail a listing.

Nope. Belarus, India, Kazakhstan, Kyrgyzstan, Russia, Syria and Zimbabwe all blocked the move to ban chrysotile. There are ongoing efforts to change the terms of the convention so that a three-quarter majority is enough when a consensus proves impossible, but until that’s passed asbestos is still going to be used in most countries around the world.